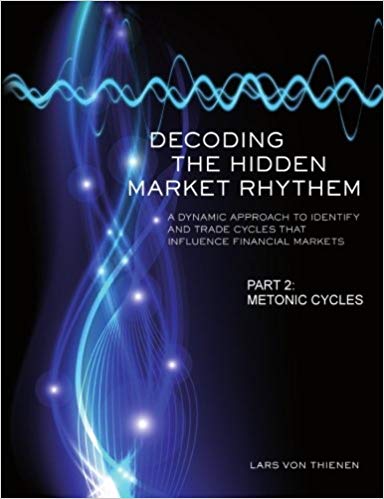 The book introduces correlations between markets and external energy cycles like gravity and geomagnetism. Digital signal processing techniques are used to reverse engineer Gann’s master cycles, resulting in a 100% mechanical cycle-based trading system that has shown a compounded growth rate of 20% per year over the last 30 years when back-tested using the Dow.

The book introduces new non-linear indicators and reviews the significance of a cyclic sentiment predictor for the Dow Jones Industrial Average Index. To that end, using daily data covering the period from 1935 to 2013, ancient cycles are considered as predictors to forecast daily sentiment for years ahead of time.

Forecasts plotted as predictive indicators are transformed into a mechanical trading rule whose profitability has been evaluated against the Dow buy-and-hold performance of 1990-2013. The results suggest that trading based on recurring sentiment significantly outperforms the Dow in nearly all performance metrics, including net return, profitability, and Sharpe ratio.

If you're a trading expert and willing to share your knowledge, speaking at TraderSummit is a great way to elevate your industry profile, gain followers and grow your business. There's no cost to apply and no speaker fees.
Speak at TraderSummit